Horoscopes
What's in the stars today? Read your free horoscope for today to get daily advice. Find out what the stars have aligned for your horoscope sign today.


Horoscopes
What's in the stars today? Read your free horoscope for today to get daily advice. Find out what the stars have aligned for your horoscope sign today.

Are you in love, but not sure he or she loves you back? How do you know if your partner is true to you? Love Calculator calculates and represents intensity of love and relationship between people in percentage. This love calculator is true and accurate and is based on your name and date of birth. Calculate love percentage between you and your lover using this free online love calculator.

Chinese Horoscope
According to Chinese Astrology, your birth year tells you more than just your age. Find out what your Chinese zodiac sign reveals about you now.


Numerology
The ancient science of Numbers known as Numerology, as the name suggests, places excess faith in numerical patterns. Since every number is said to emit a personal vibration, people with different Birth numbers have different characteristics.


Horoscopes
A horoscope is an astrological chart or diagram representing the positions of the Sun, Moon, planets, astrological aspects and sensitive angles at the time of an event, such as the moment of a person's birth.

Astrology Calculator
Enter your date of birth to calculate the exact day of the week you were born: 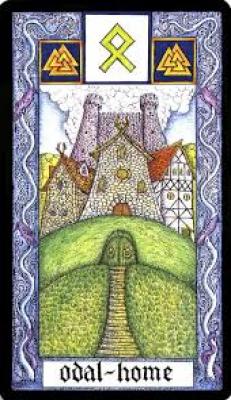 Also called Othel or Ethel
Letter: O
Old Norse name: none
Flower: snowdrop
Gem: ruby
Number: 7
Where Fehu talks about wealth in the sense of income, Othila indicates wealth as it relates to possessions. The wealth of Othila is usually large, not easily used-real estate, stocks and bonds, trusts. Othila can also indicate wills, legacies, heirlooms, and inheritance in general.
Aside from monetary inheritance, Othila can also indicate one's heritage and genetic inheritance-the physical traits that one receives from mother, father, and grandparents. Other runes with Othila may indicate what those traits are.
Othila can also indicate assistance from an older relative, such as a grandparent, or assistance from established firms or organizations, established foundations, or even the government.
When reversed, Othila often indicates delay. It can also indicate that the querent was expecting some sort of assistance but will not in fact receive it. By the same token, it could indicate that the querent was expecting an inheritance that will not be forthcoming, or that the querent wrongfully feels the 'world owes me something'. In situations like that, Othila reversed is advising the querent to stand on his own two feet.
In some circumstances, Othila reversed may indicate someone who is wealthy from his or her own actions rather than inheritance.

Tarot
Free Online Tarot Readings. Tarot cards fortune telling is the oldest and most popular system for seeing into the future. A tarot reading gives you guidance for your relationship, your career, and any other area of your life.


Oracle
Oracle interpretation based on ancient symbols and inspired by the heavenly bodies, points and angles of astrology. Choose the Free Oracle that is right for you!


Death Clock
The death clock gives you the accurately year of your death. Figure out how many more precious days have you got to live! Our advanced life expectancy calculator will accurately predict your death date for you.

Extrasensory Perception
Extrasensory perception (ESP), also known as the sixth sense, is the ability that allows acquisition of information without the use of physical senses.

Ouija Board
Enter the world of the mysterious and mystifying with the Ouija board! You've got questions and the spirit world has answers- this amazing Ouija board is your way to get them!

Biorhythm
Biorhythms were known in ancient China more than 3000 years ago. Biorhythm is a scientifically unproven theory with which you can count the good and bad days of your health.

Rune
The runes are an ancient Germanic alphabet used for writing, divination and magic. The first runic inscriptions that have survived to this day date from about 200 AD.

Moon Phase
With our Moon Phase Calendar, you'll find when the next new Moon, first quarter, full Moon, or last quarter is happening.


Phases of the Moon - show all